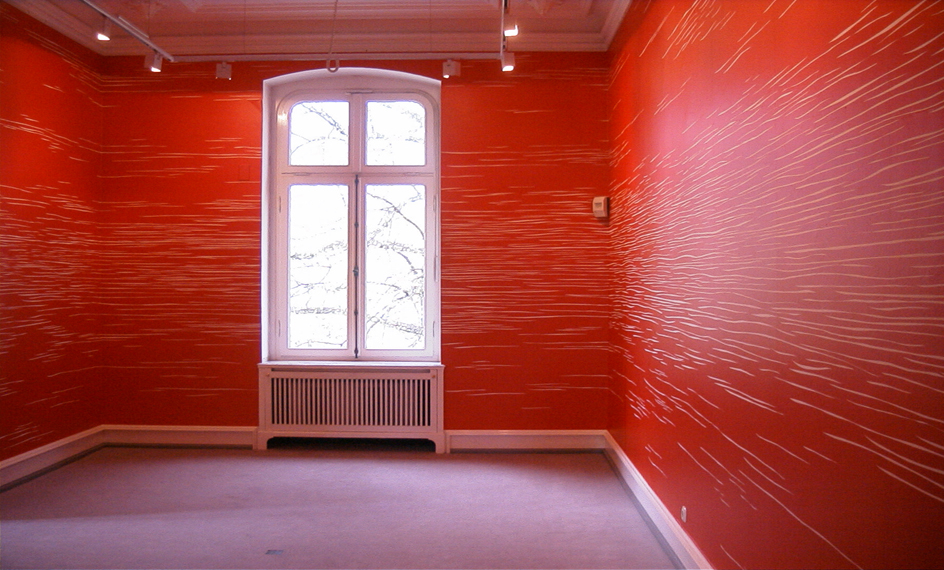 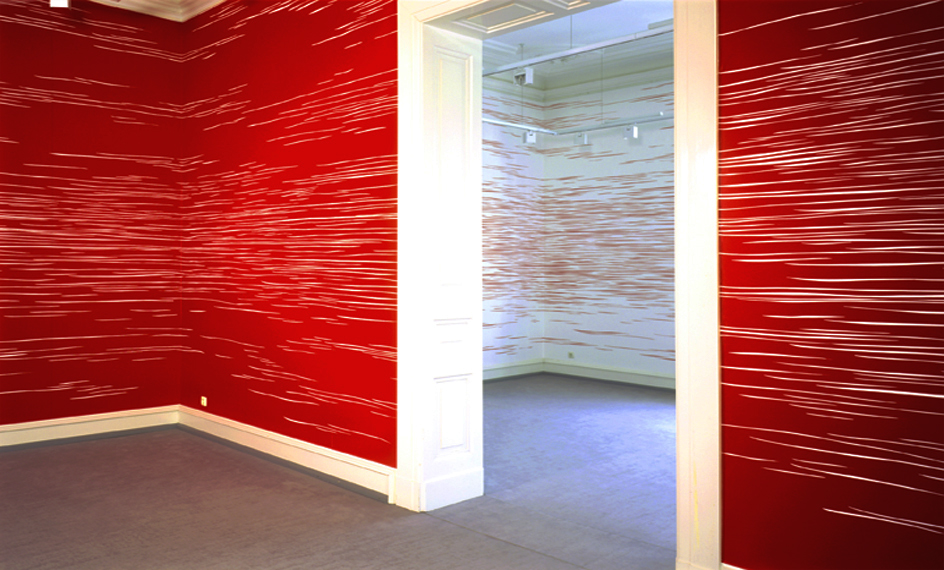 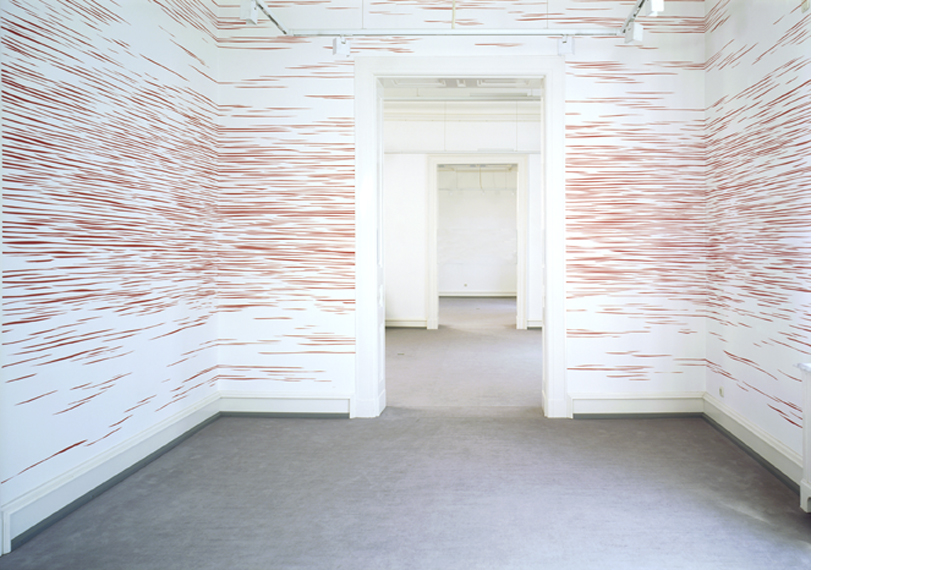 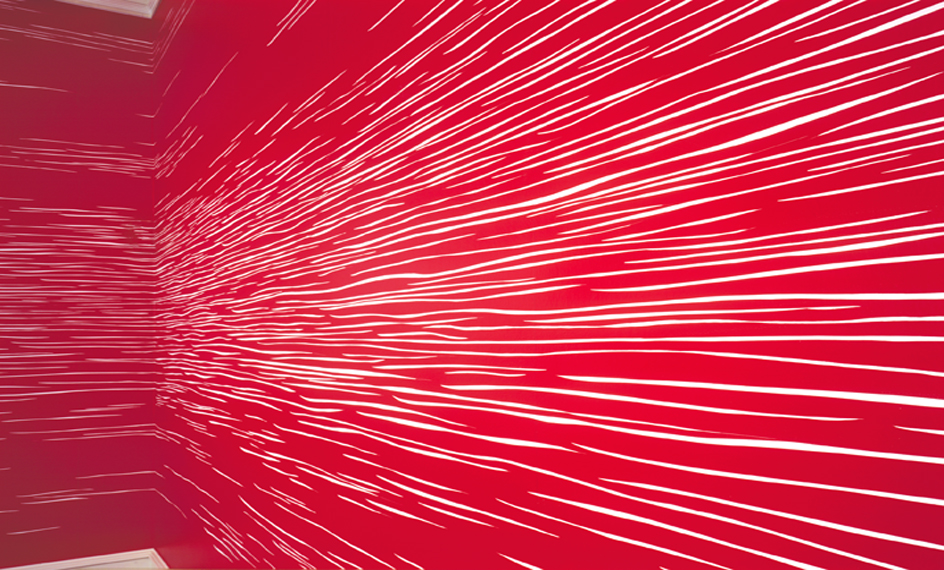 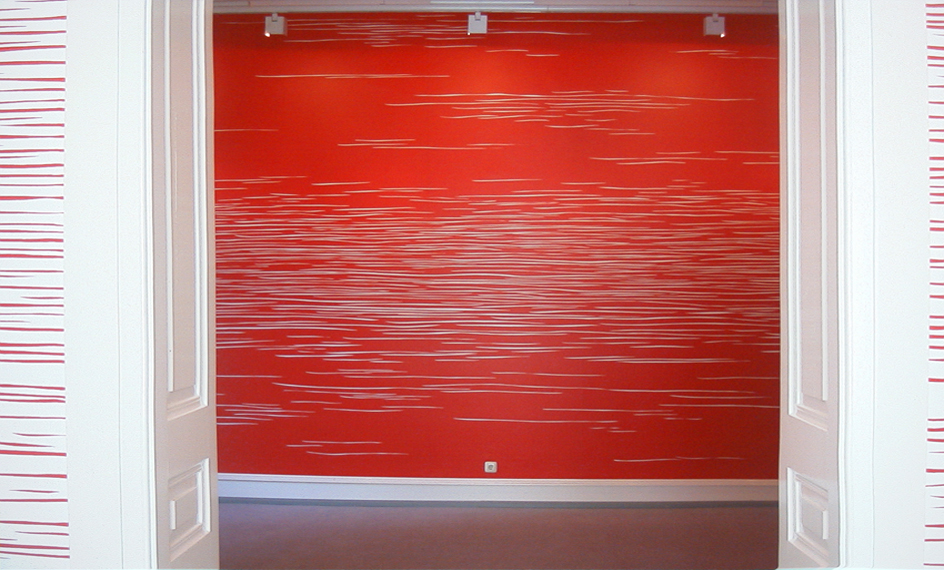 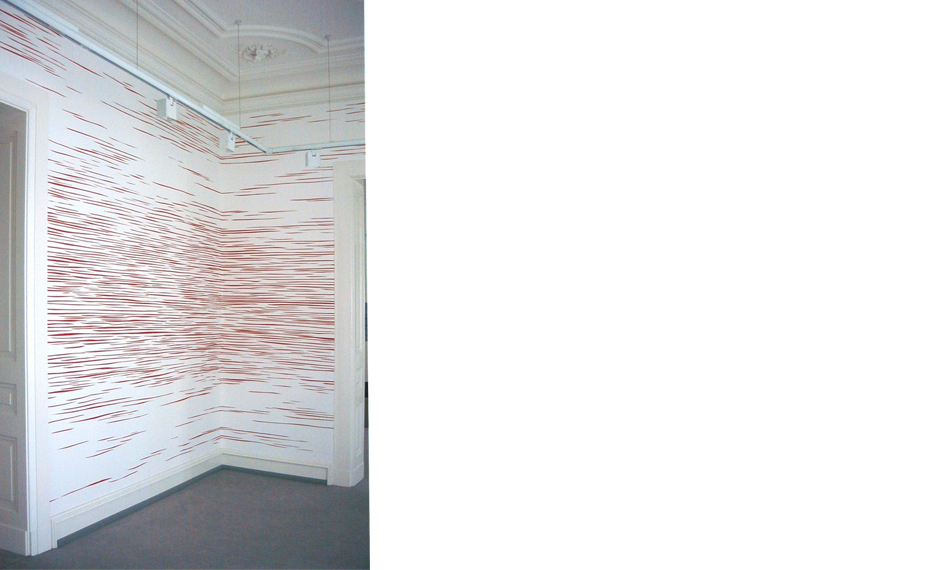 The artist Achim Zeman is one of those younger talents whose development, both highly original and convincing, the Städtische Galerie Villa Zanders has been following attentively for some time. The measure of quality and determination he has continually brought to his work has found expression in acquisitions in several collections, and, lately in installations executed by invitation for exhibition projects involving space.

For the millenium show ‘Zeiträume’ Achim Zeman created an ambitious work with a code of signs, covering and running all around the walls of the room. Several lines of ordered small ovals and linear strokes form a rhythmic structure without beginning or end. This graphic structure stems from a number system in binary code. The groups of signs that become larger and denser at eye level diminish in weight and density above and below, and in the end almost vanish. One could talk of coming and going, where the ‘present’ in the middle is weightier, and hence more clearly legible in opposition to the ‘past’ and ‘future’, in which it is indissolubly embedded. The language of the sign transponds – without our being able to read it – a message. It contains a text about the qualities of time, in which two levels of experience – the visible/emotional and the literary/intellectual are intertwined. This fusion takes place in a space defined anew by the art; its materiality seems to hover, raised far above itself in an aura of the pure energy of a glowing horizon of signs. The room changes its character and gains a new quality.

Newly defining rooms by artistic intervention or accentuating their special qualities, functions or even traditions, so they can be experienced, is a constant challenge for Achim Zeman, who does not even shy away from taking on large dimensions. Whether it be an expansive theater foyer, the stairwell of a multi-storey building or the ice of a skating rink in a stadium, Zeman’s will-to-form is not scared off by this kind of large-scale project, despite the extraordinary amount of work required and the knowledge that his project in most cases is destined to last only a short time, a few hours only in extreme cases. His intensive work in and with space, sometimes driven to the edge of exhaustion, has become his own unmistakable stamp. Just as his paintings have departed from the usual easel-painting convention, as he uses unusual, usually industrially-made materials, so also do his ‘places of colour’ form rooms of events, holding great fascination for the viewer.

In 2006 the Städtische Galerie Villa Zanders gave him a larger one-person show. Titled ‘Horizonte’, it could be seen on the second floor of the gallery, a villa from Germany’s industrial revolution, whose patrician ambiance has in some parts remained, inspiring Zeman to do two installations. They filled three rooms while his easel paintings were on view in five additional rooms. With his creation, the artist intended to set up a spectrum of fruitful interaction, with paintings spread out into space opposite paintings on a flat surface.

Both installations took the historical and architectonic features of the building as a starting point. The installation ‘Zerstreut’ to some degree formed an entryway to the show, also on the second floor.

Going up an expansive wooden staircase, you reach a large central room, nearly square, leading off to several other rooms. Antique-like decorative elements define a neo-classical space. The interplay of plaster casts of antique figures placed in niches, with pilasters, fluted columns and heavy stucco mouldings on the ceiling make for a festive atmosphere, heightened even more by the luster of crystal in the middle. The symmetrical interior architecture is reflected in the shiny parquet floor.

Zeman reacts to this architecture by taking the size of the individual parquet as a module for his installation, using this format for rectilinear elements of blue plastic foil, adhering them in varying density to the floor. The concentration of the overlay of these elements is greatest in the middle under the chandelier. This is in a way the energetic center of the piece, as the number of elements diminishes toward the edges. Some individual elements depart from the two-dimensionality of the floor and conquer the third dimension on the wall surfaces. An optical clamping of wall to floor is implied, contradicting the architectural given. This is all additive, static and hierarchically-ordered. Although the blue right-angles are also ordered, since they seem to follow a centrifugal force or its opposite, by moving toward the middle and concentrating there, their effect is dynamic, opposing the stiff order with their own ‘disorder’, heightened by the mutual interaction of the individual blue forms. There are light and dark, matte and shiny, and transparent and opaque right angles, through which a moving interplay of near and far, graspable and elusive comes into being. And because the colour of the architecture strikes an opposing note, consciously insisting on its own rightness, it does not only make its own qualities apparent, but also its own space-defining potential.

Also in the installation ‘nah und Fern’ Achim Zeman deals with ordering principles and delayed perception. Two adjacent rooms of Villa Zanders that together form a suite take up the colour of the so-called ‘Red Salon’ on the ground floor below. This salon gets its name from the red wallpaper in which it was covered in a ‘modernisation’ in the style of Louis XVI before the first World War. The Zanders family of manufacturing entrepreneurs once dined in this noble ambiance.

Achim Zeman adhered red plastic foil to the whole surface of the walls in both rooms on the floor above, connecting them by the positive-negative principle. In one room the cut-out, running horizontal-line structure appeared white, between which the red paths of thin plastic remained flat. In the adjacent room it was the opposite, in that only red lines remained on the white ground of the wall. With this arrangement, Zeman feels reminded of the character of tapestry, formerly common in lordly mansions. For him, “the installation reflects the original interior of the Villa Zanders and places it into a contemporary context by means of simple guiding lines.” Indeed every single visitor may well have this association, reminded before long of textile structures like the warp of a weaving.

However, the way the colour affects the space is more decisive than this reminiscence. The red changes the form of the room, that seemed to emphasize the tradition-bound ideas of materiality, stability and boundary. The red reflects and fills the whole room, also those parts like the ceiling with no foil adhered to them. The room loses its identity, changes in size, because our perception of it changes. The white cut-out lines, reminding one of a woodcut function, surprisingly, not like cuts making the wall visible and laying out their boundary. Thanks to their billowing out and back and their mostly gently-flowing swings they achieve a new extension and openness, of landscape. Their placements at eye-level are structured closer together, and lend support to the idea of a horizon line, offering much space for the imagination.

It is true that both rooms form a conceptual unity, looking at first like parts of a positive-negative puzzle, in which the pieces in one room look like they exactly fill the gaps in the other. However, the white (negative) room, where the red lines overlay the wall appears very different from its red (positive) counterpart. The lines have the effect of being unequally energetic, and emphasise the wall surfaces more clearly as unrelenting boundaries of the room, and make, despite the white, the materiality of the paint pushing back against the wall tangible.

The discoveries and insights that Achim Zeman’s installations open up are surprising, and make viewing them a real experience. They show with great formal simplicity how much colour may influence space and our perception. They show before our very eyes in what ways and to what extent colours can determine places.